Chiral molecules are molecules that do not have a plane of symmetry, an inversion center, or so-called improper rotation symmetry axes. For example, the water molecule has a plane of symmetry but sugar molecules don’t. See this page for an illustration of various types of molecular chirality. As a consequence, chiral molecules such as sugars, amino acids, and most other bio-molecules, come in two forms (enantiomers) that are mirror images of each other and that are not the same. The concept of chirality is not restricted to molecules; one can also speak of chiral objects in general terms. The term ‘chiral’ means ‘handedness’ and refers to the fact that our hands are mirror images of each other [when you press a hand flat against a mirror it looks the same as if you press your hands flat together] but a hand and its mirror image are not identical and you cannot superimpose them. Chiral objects always come in pairs, conceptually. Back to molecules: Two enantiomers have the same chemical reactivity, the same mass, volume, and so on. One can distinguish them most easily in two ways: First, enantiomers react differently with other chiral molecules. Second, chiral molecules are said to be optically active.

Two phenomena play an important role in the context of natural optical activity, that is to say, optical activity that occurs without applying magnetic fields and such. One of them is optical rotation. Optical rotation means the the plane of polarization of a linearly polarized light beam rotates as it passes through an optically active medium such as a solution of chiral molecules. The rotation angle is proportional to the path length through the medium, and in case of a solution it is also proportional to the concentration of the chiral substance.

The graphics below shows an animation of a linear polarized light wave as it passes through an optically active medium (indicated by the rectangular box). The plane of polarization of the light wave rotates proportional to the path length. The box dimension, the amount of rotation, and the amplitudes are not to scale. Optical rotation is measured by polarimetry. The wavelength used in polarimetry experiments is often 589.3 nm (this is the yellow light from a sodium lamp). Optical rotation data are typically given in terms of a path length of 10 cm (1/3 foot).

Identically prepared solutions of the two enantiomers of a chiral molecule rotate the polarization plane in equal but opposite directions. A mixture of equal amounts of the two enantiomers (racemate) or a nonchiral substance does not exhibit this effect. However, the sign of the rotation is not in a simple way related to the chiral structure in the sense that, say, a D configuration would always have a positive or negative optical rotation. Therefore, without additional structural information it is not possible to deduce an unknown absolute configuration of a molecule simply from the sign of the optical rotation. Quantum theoretical calculations are very useful in this case.

Another important phenomenon that is only observed for chiral substances is called circular dichroism (CD). In a nutshell, if we record the electronic absorption spectrum (typically in the UV-Vis range) of a chiral substance with circularly polarized light (see explanations below) instead of linearly polarized light, the spectra for one of the enantiomers recorded with left or right circularly polarized light differ slightly. Compare the red and green curves in the image below. (See the next paragraph for some animations of circularly and elliptically polarized waves and further explanations). If we plot the difference between the two absorption spectra we have what is called the CD spectrum shown in the graphics below in blue (here: ‘red minus green’). The CD spectrum (the Δ𝜀 curve) for the other enantiomer would have the opposite sign, i.e. we would obtain the blue curve mirrored at the horizontal axis. Nonchiral substances do not exhibit CD except in the presence of a static magnetic field (Faraday effect). 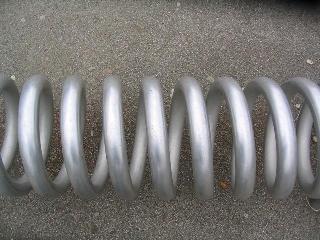 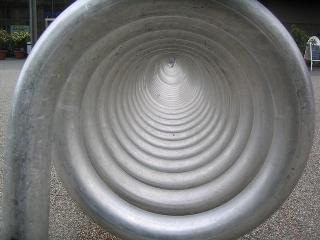 Any helical object like this one has a mirror image that is also helical but with the opposite sense of rotation. The mirror image and the original are not identical. In a sense, every chiral molecule also has such a helicity built into it.

The two forms of circular polarization of light (left or right) are mirror images of each other. First, let’s see what a circularly polarized light wave looks like. We consider only the electric field component of the electromagnetic wave. Suppose you superimpose (add) two linearly polarized electromagnetic waves with the same amplitude and frequency (wavelength) but where the electric field vector in the one case oscillates, say, in the xz plane and in the other case it oscillates in the yz plane. Suppose the waves propagate in the z direction. If the two waves have a phase shift of exactly one quarter of the wavelength, voila! We obtain a light wave where the resulting electric field vector at any point along the z direction turns around on a circle either clock-wise or anti-clock-wise. This is why we call this light wave circularly polarized. See the animation below on the left. In the case that the two amplitudes are not exactly equal, the electric field vector rotates clock-wise or anti-clock-wise on an ellipse instead and we obtain elliptically polarized light. See the animation below on the right. You can also download interactive versions of these animations by following the Download links. You need the Wolfram Player (free download from the Wolfram research web site)

In both animations the electric field vector (orange) at a fixed position z in space (here at 12 π) is shown in addition to the wave itself as it propagates. The circular and elliptic polarizations are clearly visible. In blue and red we have the two individual linearly polarized light beams and in green their superposition. Because the ‘green wave’ has the shape of a helix it can be considered chiral in some sense, because there is a left-handed and a right-handed helix which are mirror images of each other. In the animations above, the blue wave is one quarter of a wavelength ahead of the red one. If it were behind instead, we would obtain circularly or elliptically polarized light with the opposite helicity.

As an example, consider the molecule ‘hexahelicene’. Its chemical formula is shown below on the left (‘hexa’ because of the 6 aromatic rings). The molecule adopts a helical shape as shown in the middle, otherwise the atoms at the ends of the molecule would get too close. There are two possible forms: a left-handed helical form as shown below (M for the ‘Minus’ sense of hecility), and its the mirror image which has a right-handed helical shape (not shown. This molecule is named (P)-hexahelicene, ‘Plus’). Because of its helical shape, the molecule is chiral. It has a very intense CD spectrum shown below on the right. In green is the experiment. The red spectrum is the result of a computation that we performed in 2002 (Ref. [9]) which agrees quite well with the experiment except at the shortest wavelengths where we cut off the computation of additional excitations. (P)-Hexahelicene would have a CD spectrum of the opposite sign.

What causes the optical rotation?

Suppose we investigate optical rotation at a wavelength where the medium absorbs some of the light’s intensity. Because a chiral medium absorbs left and right circularly polarized light differently (the CD effect), the amplitudes of the outgoing two circularly polarized components of the light beam are not equal anymore after they have passed through the absorbing chiral medium. They have a phase shift and a different amplitude. We end up with a situation similar to the one depicted in the animation above of elliptic polarization (caused by the different amplitudes of the linearly polarized components). In other words, the outgoing light beam is not linearly polarized anymore. Instead, it is elliptically polarized. See the animation below. It was created with Mathematica in the same way as the animation at the top of the page, but with one of the circular components being reduced in amplitude as it passes through the optically active medium. The ellipticity of the outgoing light is clearly visible in the electric field vector (orange) at some fixed position.

Because the elliptic polarization results from the different absorption coefficients at that wavelength (or frequency), the amount of ellipticity is directly related to the circular dichroism. The difference is that the CD is obtained by considering the absorption of left and right circularly polarized light individually and then taking the difference. Ellipticity can be understood as being the result of doing the experiment with both light polarizations simultaneously (by starting out with linearly polarized light).

© 2005 – 2022 J. Autschbach. The material shown on this web page is in parts based on the results of research funded by grants from the National Science Foundation (NSF, CHE 0447321, 0952253) and educational projects supported by these grants. Any opinions, findings, and conclusions or recommendations expressed in this material are those of the author and do not necessarily reflect the views of the National Science Foundation.