Chirality without an asymmetric carbon

In a beginner’s course in organic chemistry, perhaps already in high school, you may have heard about chiral molecules. Chiral molecules such as sugars, amino acids, and most other bio-molecules, come in two forms that are mirror images of each other and that are not the same, called an enantiomer pair. The term ‘chiral’ means ‘handedness’ and refers to the fact that our hands are mirror images of each other. When you press a hand flat against a mirror it looks the same as if you press your hands flat together. A hand and its mirror image are not identical; you cannot superimpose them. Chiral objects always come in such pairs, conceptually.

Chiral molecules are usually first introduced along with the concept of the asymmetric carbon. Check out this molecule:

There is a carbon with 4 different substituents, chosen here to be hydrogen and 3 different halides. The molecule’s chemical formula is CHFClBr. My long-time scientific collaborator Prof. Jeanne Crassous nee Costante, who is a professor at the University of Rennes in France, actually once made this compound when she was a graduate student, so that its Raman vibrational optical activity could be studied [1]. Above, the two enantiomers of CHFClBr are shown. If you try to superimpose them, for example by turning the right one around the C-Br axis by 180 degrees, the right enantiomer looks like the one on the left but with F and Cl exchanged. The two are not superimposable. If you had two Cl instead of F and Cl, say, then there would be a mirror plane of symmetry going through H, C, and Br, such that the two Cl would be mirror images of each other. Generally, a molecule that has a mirror plane of symmetry is not chiral. The asymmetric carbon is a chiral center with 4 different substituents. In the example above, the substituents are H, F, Cl, and Br, but any 4 different substituents would do.

Unfortunately, many beginner’s classes do not mention that there are many beautiful molecules that are chiral, and often very strongly optically active, but they do not contain even a single asymmetric carbon. The asymmetric carbon is not the essence of 3-dimensional molecular chirality. Rather, it is the lack of a mirror plane of symmetry that is the essence of chirality. [To be precise, a chiral molecule does not have an improper rotation axis of symmetry. A mirror plane is a special case of an improper rotation, corresponding to ‘no rotation’ (or multiples of 360 degrees) about an axis and a reflection in a plane perpendicular to the same axis.]

A molecular analog of a helix is formed, for instance, by this molecule:

Each carbon is unsaturated, with only three bonding partners, and there is no asymmetric carbon center. The chemical drawing on the left is a bit misleading, because the molecule is not planar (otherwise it would have a plane of symmetry). The two ends would bump into each other. Organic chemists speak of steric repulsion. To avoid this, one of the terminal rings has to go above or below the other. This produces the two enantiomers. One of them is shown as a 3-dimensional ‘tube’ model. It is the M-enantiomer, with a negative sense of rotation (M is for ‘minus’). The P-enantiomer (not shown) has a helical twist in the opposite direction. Hexahelicene is a member of the class of carbo-helicenes. A more systematic naming is [6]helicene, where the number in brackets indicates the number of fused benzene rings. When there are only 3 fused rings, the ends of the molecules do not touch each other and the molecule adopts planar non-chiral structure. For [4]helicene and [5]helicene the two enantiomers can interconvert by thermal motion, less easily so for the [5]helicene. Starting with [6]helicene, the steric repulsion between the terminal rings is so strong that the two enantiomers are stable and do not easily interconvert. Making helicenes with larger numbers of fused rings is increasingly difficult. [16]helicene was first made in 2015.

The helix-like shape adopted by this molecule, called binaphthol, is a bit harder to sense:

The thick lines indicate bonds that are closer to the viewer, because the two naphthol moieties are rotated relative to each other around the C–C bond connecting them. There is a kind of right-handed helical sense when going from top left to bottom left. Like the helicenes, this molecule is chiral and optically active, and it has an enantiomer with an opposite helical sense (not shown), but it has no asymmetric carbon.

Then there is the famous DNA double helix. The double helix itself is chiral, and furthermore this chiral superstructure is built from nucleotides that are inherently chiral, too, and they contain asymmetric carbons.

Propeller-shaped molecules are also chiral. Turn a propeller one way will move a boat forward, but turning it in the opposite direction – or using the propeller’s mirror image – will reverse the direction of motion. This molecule has a propeller shape: 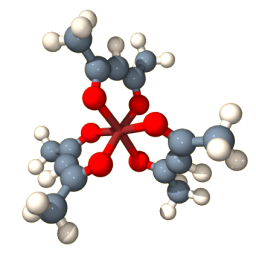 There is a metal ion in the center, in this case it is supposed to be cobalt(3+), which holds the three ligands called ‘acetylacetonato’, or short ‘acac’, in place. The result is a neutral chiral metal complex Co(acac)3. The metal is coordinated by six oxygen atoms. Three of these are drawn larger in perspective and are closer to the viewer than the other three oxygens. If you now look at the carbons connecting the two oxygens of the same ligand, there is a sense of rotation going from the closer oxygen with a right-turn to the oxygen that is further away from the viewer. This sense of rotation is the same for the three acac ligands. With a left rotation, instead, you would have the enantiomer. A similar propeller arrangement is adopted by this complex, [Os(phen)3]2+, with metal-coordinating nitrogen atoms shown in light blue: 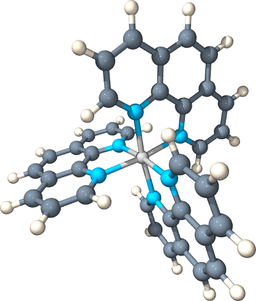 Like for the helicenes, in these metal complexes there is in a sense of rotation connecting different atoms (and the lack of a mirror plane of symmetry) that underlies the chirality, not necessarily a chiral metal center. What I mean by this is that even if the atoms coordinating the metal were in a perfectly octahedral arrangement (an octahedron is not chiral), the connections within the ligands render the complex chiral. However, because of the internal rigidity of ligands like the ones shown above, the metal-coordinating atoms are also slightly distorted from an idealized octahedral arrangement, and so you have additionally a chiral metal center. The animations below show an angular (‘azimuthal’) distortion of an octahedron, and an axial (‘polar’) distortion (elongation or compression along a 3-fold axis of symmetry).

When the metal-coordinating atoms undergo both distortions simultaneously in one or another direction, and remain statically in this distorted arrangement, then the metal ion is in a chiral environment. There are cases where the metal vs. ligand-arrangement chirality can be probed independently in an experiment, for example via the circular dichroism of metal-centered vs. ligand-centered electronic excitations. I have written about this topic in some detail in Publication [194]. If you are interested, have a look at the manuscript PDF or the published version.

Finally, one can make metal complexes in which the ligands are chiral by themselves, for example ligands with helicene motifs. Such molecules are the focus of some of my research with Prof. Jeanne Crassous, who synthesizes beautiful metal-helicene complexes and characterizes them with experimental methods. Check out our joint publications (search for ‘Crassous’ on this page) for details.

© 2017 – 2022 J. Autschbach. The material shown on this web page is in parts or wholly based on the results of research funded by grants from the National Science Foundation [NSF, grants CHE 0447321, 0952253, 1265833, 1560881, 1855470] and educational projects supported by these grants. Any opinions, findings, and conclusions or recommendations expressed in this material are those of the author and do not necessarily reflect the views of the National Science Foundation.